After The Winning Season was released last July, one of the most often asked questions that came my way was: “What about J.T. and Angie?”

For those of you who asked, here’s your answer. J.T. Sawyer and Angie DeMarco get star billing in my next release, Catching Heat, and I’m thrilled to share the details with all of you. 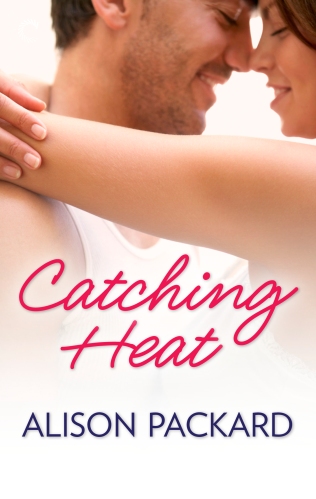 Life has taught Angie DeMarco that all baseball players are womanizers, and her incredible one-night stand with sexy San Francisco Blaze back-up catcher J.T. Sawyer seemed to prove it. Determined not to give in to their sizzling chemistry a second time, she’s kept her distance ever since, focusing on her accounting job with the team. But now she’s laid off…and pregnant.

J.T. was hurt by Angie’s rejection, but with one more year with the Blaze, he has no time for love. He needs to spend the off season training hard so he can negotiate a better contract with a new team at the end of the year. But when Angie shows up on his doorstep, he‘s overwhelmed by wanting to not just do right by her but pursue a relationship with her. Hoping for a second chance, he proposes.

Angie agrees to marry J.T. on one condition: the marriage will be purely a business arrangement. But as Angie spends time with him and his family, and J.T. neglects his training to spend time with her, what begins as a union in name only slowly grows into something more—something that looks a whole lot like love and friendship.

And now for the giveaway details: To celebrate the upcoming release of Catching Heat, I have a few print copies of my first book, Love in the Afternoon to giveaway to four lucky winners. Because my books have been digital release only, a print copy is pretty rare. Of course, if you don’t care for print books, I’m more than happy to provide a Kindle, Nook or Kobo e-book copy of Love in the Afternoon or The Winning Season. Basically, it’s the winners choice! The giveaway is open internationally and will close at 9 pm PST on Saturday, January 11, 2014 .

It’s super easy to win. All you have to do is leave a comment below. Good luck!

15 thoughts on “CATCHING HEAT ~ A Preview and a Giveaway!”