Can you believe summer is almost over? In just a few weeks, kids will be back in school, the weather will turn cooler, and before you know it, we’ll be talking about the holidays. This summer was pretty crazy for me. Especially the month of July. The week my second novel, The Winning Season, was released I was in Atlanta, Georgia, attending my first RWA (Romance Writers of America) conference. Also that week, I was participating in the Sizzlin’ Summer of Contemporary Romance Giveaway, with my fellow Carina Press authors, Kat Latham, Reese Ryan, Kelsey Browning and Tamara Morgan. As you can imagine, that week was hectic. 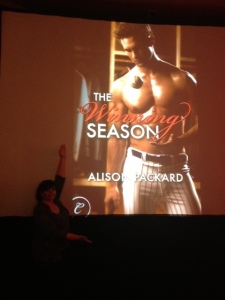 That’s me standing in front of a huge cover of The Winning Season. It was one of many covers that played in a continuous loop at the Harlequin party. I had to get a picture…who knows if that will ever happen again!

The RWA conference was amazing. I met some really wonderful people, attended several craft workshops and cried like a baby during both the keynote address by Cathy Maxwell, and the service awards luncheon speech by Kristin Higgins. What I learned was that I’m not the only one who agonizes over a book, or doubts my ability, or wonders if I’ll ever be able come up with a new plot. Being with my fellow authors made me feel less alone, and very much like I was part of a community.

I also got the chance to dance the night away at the Harlequin party, with my new friends and fellow Carina Press authors, Jodie Griffin and Brighton Walsh. I’m on the shy side, so I had to be cajoled into going and I’m sure glad I did. It was a blast and I got to see Nora Roberts shake her booty on the dance floor. She was on fire, people. I’m not even kidding. 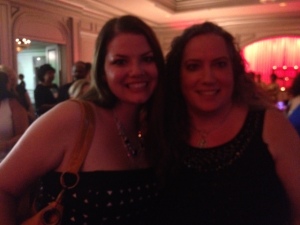 Above are my Harlequin party partners-in-crime: Brighton Walsh (l) and Jodie Griffin (r). Two amazing and fun ladies. We had a blast that night.

Another highlight was afternoon tea with my editor, Angela James, and several of my fellow Carina Press authors. I’ve never been to an afternoon tea so I wasn’t sure what to expect. I’m not a big tea drinker, but when the server described one tea as tasting like an orange creamsicle, I knew that was the tea for me. It turned out to be a good choice – it was delicious. We were also served some lovely sweet and savory items. Of course, I munched on only the sweet items because that’s how I roll. LOL. 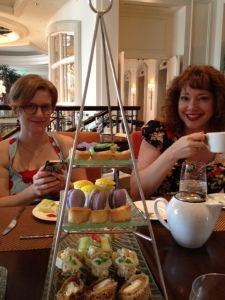 Another cool thing was I got to meet one of my favorite authors, Julie James. She was very gracious as I babbled on and on about loving her books.

And now that this crazy summer is winding down I, for one, am looking forward to relaxing a bit. Or at least until I start my next book. I’ve got the characters; I just need to figure out the plot!

4 thoughts on “One Crazy Summer”