The countdown to the release day for Breaking His Rules has begun! To kick things off, I’m sharing an excerpt from the book and giving away a rare print copy of my second book, The Winning Season. 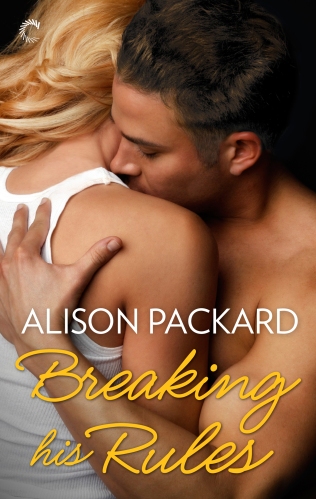 “I went to my cousin’s bridal shower earlier today.” Jake looked up, relieved to find that she hadn’t appeared to notice him staring at her breasts. Good. Now he just had to remind himself not to do it again. He shouldn’t be thinking anything other than professional thoughts about her. Friend or not, Melissa was his client and therefore strictly off-limits. “She’s getting married next month at Pebble Beach.”

He let out a low whistle. “Beautiful, but from what I know of that area, pricey.”

“My aunt and uncle are very well off.” Melissa pushed her cup to the side and folded her arms on the table. “You know how I told you she always made fun of my weight when we were kids?”

Jake nodded, remembering their conversation of a few months ago. “She sounds like a witch.”

“She is.” Melissa sighed. “I overheard her and her friend talking about me in the ladies’ room.” She gave him a wan smile. “And you know what they say about eavesdroppers never hearing good of themselves. Well, it’s true.”

“That I was too fat to be a bridesmaid and that even if I’m able to get a date to her wedding, it’ll probably be with some loser.”

Jake tamped down his anger. He’d struggled with his weight when he was younger and knew only too well how cruel some people could be. Leaning forward, he reached across the table and put his hand on Melissa’s arm. He tried not to notice the satiny smoothness of her skin but failed and quickly withdrew before the warmth of her skin could tempt him to linger. “Don’t let her get to you, Melissa. She’s not worth it.”

“That’s what I told Paige when she suggested we sabotage the wedding ceremony.”

Jake couldn’t help but laugh. “I’ve only met your sister twice, but that’s exactly what I’d expect her to suggest.”

Melissa smiled, then quickly sobered and gave him a determined look. “I’m going to that wedding even though it’s the last thing on earth I want to do.”

“Do you have a date?” he asked, more interested in Melissa’s private life than he should be. She’d never mentioned a boyfriend, but that didn’t mean she wasn’t seeing someone. Even at her heaviest—as she’d been when he’d met her—she was an attractive woman.

“No. But I have this off the wall—” She stopped mid-sentence, stared at him for several seconds, then she shook her head and laughed. She had a good laugh—melodic and sexy at the same time. “Never mind.”

“Never mind what?” he asked as he leaned back.

“It wasn’t important.” She tucked a loose tendril of hair behind her ear. Her cheeks turned pink under his scrutiny. “Okay. Okay. I was thinking about hiring an escort for the wedding. Someone super-hot. That would shut my cousin up for good.”

“Hire an escort?” Jake asked, surprised she’d go to such lengths—especially when she didn’t need to. He grinned as the perfect solution to her problem materialized in his head. It was the least he could do for a friend. “I have a much better idea and it won’t cost you any money.”

One delicately arched brow rose. “What’s your idea?” she asked, with a hint of trepidation.

BREAKING HIS RULES will be released on September 8th and is available for pre-order at the follow digital retailers:

And now for the giveaway: To win a print copy (or e-book version if you prefer) of my second book, The Winning Season, just leave a comment below. The giveaway is open internationally and will close on Friday, August 8, 2014 at 9 pm, PST. Good luck!

The giveaway is now closed.

27 thoughts on “An Excerpt from BREAKING HIS RULES (plus a giveaway!)”