Please join the Thunderclap for the release of CROSSING THE LINE. It’s important to get the word out on release day, and I would love your help to make that happen.

Pledge to help my Thunderclap here. 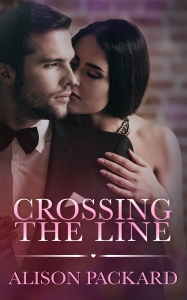 Sloane Westbrook is passionate about the law, and when she signs on to fight crime as the new Assistant District Attorney in Piedmont, Pennsylvania, she fearlessly takes on the prosecution of an evil, serial rapist. But her continued encounters with powerful, sexy Jared Hunter bring a different kind of danger. Jared is the known associate of a local crime boss, which makes her attraction to him tantamount to career suicide…so why can’t she stop thinking about him?

Jared Hunter owes his life to the crime boss who took him in when tragedy struck, and his family turned their backs. Jared’s loyalty led him to the role of trusted confidant and security expert, which means he’s in way too deep to back out now. Even for a beautiful, intelligent, bundle of curves like the new ADA. But every encounter with Sloane makes him want her more—and when they’re snowbound together by a freak storm, his resistance shatters. How will he walk away?

Locked in a secret, fiery affair, both Sloane and Jared long for the life they could have together in the light. But to get there, can Jared break free of the darkness surrounding him? And can Sloane find the courage to make a decision that will either free them both, or shatter their lives forever?