Today I’m excited to reveal the cover for Hearts on Fire! I absolutely love the cover and I hope you do too. 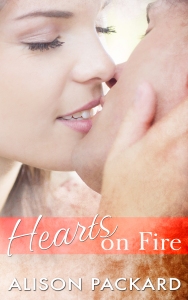 Country music star Jessie Grant has it all. An amazing voice, a string of multi-platinum albums, and a sold-out concert tour. But just before her Hearts on Fire tour rolls into Las Vegas, her lead guitarist is badly injured and is unable to play. Desperate to find a replacement before the night of a televised live show, Jessie is forced to accept help from the last person on earth she wants to see again.

Drew Carmichael has earned a well-deserved reputation as one of the best up-and-coming musicians in Nashville, without cashing in on his renowned father’s name. When Jessie’s manager calls and asks him to fill in for her band’s injured guitar player, he agrees to help Jessie out even though she cut him out of her life four months ago.

In Sin City, sparks fly between Jessie and Drew, and it isn’t long before they give in to their mutual attraction. But when the dark past Jessie has successfully hidden for ten years explodes in the media, their tenuous bond is put to the test, and both Jessie and Drew must learn to trust each other if they don’t want their newfound romantic relationship to go up in flames.

As part of the cover reveal festivities, I’m giving away a $10 gift card to either Amazon or B&N to one lucky winner. Below is the link to the book review blogs participating on the tour. Each blog has a Rafflecopter entry form.

PS. Scroll down a bit to see the tour host and the links to their blogs.

Wow! It’s 2015. I’m not sure about you, but that completely boggles my mind. I hope you all had a wonderful holiday season, and are enjoying the New Year so far.

Since my last blog post in September, I’ve been working hard to complete two writing projects, and I’m happy to say that both of them were done before the ball dropped on New Year’s Eve.

Firstly, I’m thrilled to announce that Hearts on Fire, my super-secret novella (47,000 words), will have its cover reveal on January 19th, and will be published on February 3rd. Hearts on Fire is not a part of my Feeling the Heat series, it’s a stand alone story and features two young country musicians reconnecting just before an important concert in Las Vegas. You’ll find out more about the characters, and the story, on cover reveal day. I really enjoyed writing this book. I hope you’re as excited about Hearts on Fire as I am!

In more good news, the next installment in my Feeling the Heat series has been turned into my editor, and from what I understand, it will be published in July of this year. Originally titled Game Change, it underwent a title change at Carina Press, and the new title is Stealing Second.

Stealing Second marks a return to San Francisco, and the Blaze professional baseball team. The story takes place during the season, with the Blaze, once again, trying to fight their way into the post-season. Stay tuned for more information and a cover reveal!